Time, friction and pressure make the pearl. Sometimes we don’t know how…or even if we will find the beauty in life….but it is there, often just when we are about to lose faith. That’s the reoccurring theme we hear in this album that collects songs written over the last 8 years: the theme of faith — and the lack of it. Faith in God, in love, in each other, and even in faith itself. “Little Pearl” came out of a busy time for David. Having played on the last four albums by Texas troubadour Alejandro Escovedo, he was also musical director for the famed Alejandro Escovedo Orchestra, and toured extensively with him from 2002 to 2012.

In 2012, David was asked to be the bandleader for Robert Plant and Patty Griffin’s special two show engagement at the Continental Club in his hometown, Austin, Texas. In 2013, He began touring with Patty as well as playing on her most recent release, “Servant of Love” She shares her gorgeous vocals on “Little Pearl” – and so much more.

Over the years, David has regularly played Austin clubs with everyone from Darden Smith to Amy Cook, and recorded most recently on fellow Austinite’s “Carrie Rodriguez and the Sacred Hearts,” which boasts such other bandmates as Bill Frisell and Viktor Krauss. All of this is part of an education that began with his mother, whose incredible musical abilities created an environment of both discipline of craft and exploration of spirit. From his first recording session at age seven to his Jazz Studies degree from the University of North Texas it was clear that the gifts passed down to him were exceptional.

These songs are about that long journey and the lessons learned along the way. What you hear in this cd could not have been created without his friend and co-writer Daniel Wolff, producer Eddy Hobizal and the incredible cast of musicians that performed on it. Their faith in him helped make this album possible 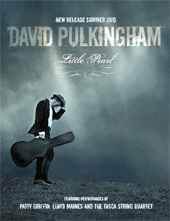